skip to main | skip to sidebar

Bep-Kororoti - Visitor from the Stars?

In his 1972 book "Gods from outer Space" Erich von Däniken first published details of the myth of Bep-Kororoti. In this, a straw suit, bearing an astonishing resemblance to a modern space suit, plays an important role in the ritual dances of the Brazilian Kayapó Indians. The myth reported by Erich von Däniken indicates that Bep-Kororoti, who wears this suit, was a "visitor from the stars". 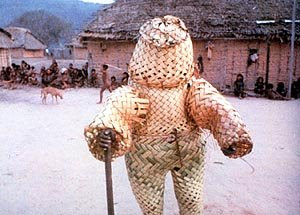 Critics of the interpretation of this myth in terms of the Paleo-SETI-Hypothesis have suggested that the modern Kayapó were inspired by a modern space suit when creating this straw suit. Members of the tribe have been in loose contact with so-called modern civilization for several decades, and may have seen space suits in magazines, newspapers, or on the television. However, this point of citicism can be definitely refuted.

The Straw Suits of the Bakairi
Back in 1884, the ethnologist Karl von den Steinen (2, 3) was on an expedition through central Brazil, and when with the Bakairi Indians photographed a similar straw suit, somewhat frayed and worn out, which he found in one of their huts. 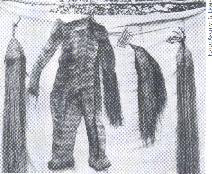 Straw suit (without head-piece) of the Bakairi, Photo by Karl von den Steinen 1884

He did not include the associated head-piece in his photo - the three objects on the right sight and left belong to other dance suits. The Bakairi told Karl von den Steinen that their name for this suit was kualohe ("house") and the associated head-piece was the "head-house". They said that one had to climb into such a suit through its neck, where it was about one meter in width, then tie it up with a rope provided for the purpose so that it enclosed the entire body. The head-piece was put on separately and covered the entire head. The Bakairi used palm straw leaves to make this suit, as also did the Kayapó.
The Bakairi knew that their heavenly culture-bringer Keri had worn such a suit. The Indians remember a time long ago at which there were close connections between the inhabitants of heaven and the inhabitants of Earth. The heavenly visitors had a "heaven-world" which was then quite close to the Earth, and apparently mobile. Then, one day, they disappeared whith it, up and out into the Universe.

The Culture-bringers of the Kauá and Karajá
At the beginning of the 20th century the ethnologist Theodor Koch-Grünberg (4) also spotted a "trouser-suit", as he called it, from the Kauá Indians during one of his research expeditions, this time in the area of the source of Brazil's Rio Negro. This was for Koch-Grünberg grossly different from all other dance suits, with an "unusual mask" which too was said to represent a culture-bringer. Koch-Grünberg describes ist as nade from plaited raffia, with trouser legs, completly enclosing the body. With it there was a separate head-piece, on which the Kauá paintet round black eye-holes, and which the dancer playing the part of the culture-bringer put over his head and neck.
In 1909 Koch-Grünberg wrote: "(This suit must) have originated from a non-European influence, since troucer-masks are to be found with the totally uncontacted tribes in the area of the source of the Xingu." This important reference of Koch-Grünberg relates to the straw suit of the Bakairi documented by Karl von den Steinen in 1884; since Koch-Grünberg writes of the Xingu source tribes in the plural, he must have known of at least one other tribe in that aera that possessed such a straw suit - quite possibly the Kayapó, who like the Bakairi live in the Xingu source region. In 1909/1910 Koch-Grünberg published his book "Two Years with the Indians". In it he adds a footnote to the effect that the ethnologist Paul Ehrenreich had found plaited straw suits with trouser legs with the Karajá Indians, a central Brazilian "fisher-people".

The Indians in the Brazilian Rio Negro source region claim to have seen the first of these suits with the culture-bringers, who in ancient times had stayed on Earth as teachers. At that time they lived in "stone-houses" according to the Kauá, and moved around outside of them wearing these suits. They also traveled about the country, and everywhere that they went these mask-dances were performed in imitation of them. The Rio Negro Indians later told Koch-Grünberg also that their instructors, who had taught them agriculture among other things, had vanished back to the stars. The Kauá envision them to be still up there, dressed in their remarkable suits.
These different myths fit together wonderfully in their "hard" core:
Such a suit was attributed to one or more culture-bringers, believed to have "come from the stars"; these teachers brought skills such as farming to the Indians, and then later returned "to the stars".

Kayapó Myths
The Kayapo myths tell a very similar story. The anthropologist Anton Lukesch (5, 6, 7) lived with the Kayapó from 1954 till 1970 with one break, conducting ethnological field research. The Indians reported to him, that their Bep-Kororoti too "returned to the stars", where, they believe, he still resides. An inhabitable world "in heaven" is not a strange concept for the Kayapó, because they know that in the distant past their own ancestors had lived on a world in the sky similar to Earth. After the "Earth below" - our planet - had been discovered, a part of them had emigrated to it. As it was suitable for people, they decided "to go down there". The Kayapó told Lukesch that not all settlers had been able to make it, but had had to stay in their old home, because some "breakdown" during the "move" had prevented further descents. The descendants of those who stayed behind are still living on the heavenly world.
The tradition is made still more exciting by the statement that Bep-Kororoti, when he visited the Earth, had gone back not to this world, but to yet another one, which is also up in heaven, known as the Place of Abundant Food. From this place Bep-Kororoti came back for a second visit to Earth, and later his daughter visited the Kayapó. Sie married a Kayapó and bor his children.
During a famine this celestial lady flew back up to Bep-Kororoti in the sky, and on her return she brought back many fruits and plants, including the manioc tuber which is a basic food component all over Brazil. The Kayapó still regocnize today, that it was Bep-Kororoti's daughter who introduced their ancestors to shifting cultivation and the planting and cultivation of the celestial manioc tuber (8).
The Brazilian myths of heavenly culture-bringers and teachers discussed here are merely the tip of the iceberg. I would split the seams of this article if I were to mention everything which conforms and supplements these assertions. This whole-body suit, so astonishingly similar to an modern space suit, found with various Brazilian Indian tribes as we have seen, matches perfectly with the picture drawn by the myths. This object quite clearly imitates an all-enveloping suit which was first seen worn by one or more heavenly teachers, who later went "back to heaven". Therefore the suit constitutes as object of great significance for Paleo-SETI.
Members of technologically-primitive tribes like to imitate the objects and behavior of other civilizations with which they come into contact - especially technically superior ones. This is still going on today. In 1947, the ethnologist Dr. Herbert Baldus (9) visited a central Brazilian Indian tribe. He found an example of this in a little girl, whose face was painted not only with the black designs of the tribe, but also with red lipstick - like a "westernized" lady! And then there is the large straw hat adapted by the south Barzilian Kaingang as a result of contact with Westerners, which is worn continually after early childhood as a sign of masculinity and has taken over the role of the lip-plug, which with other tribes is used as the sign of the male sex. As a Paleo-SETI researcher one can go on to ask: what was the origin of wearing these lip-plugs? The Brazilian Karajá claim to have seen them for the first time on their culture-bringers, they who taught them to plant maize, manioc, and pinapples... 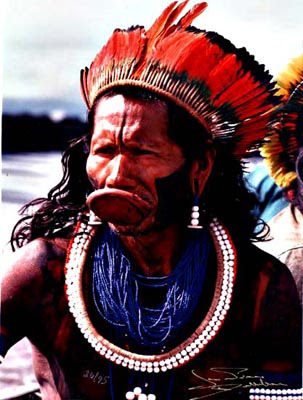 Brazilian Indian myths, dance masks, ritual objects, cultural dances etc. - all certainly form significant pieces in the Paleo-SETI mosaic. The straw suit of the Kayapó was certainly not inspired by a modern space suit, as proved by objects found already in the 19th century (for example 1884). And then there ist the oral tradition that the suit was worn by visitors who came "from the stars", and then returned to where they came from. In Brazil too, our past appears to be much more fantastic than our history books would like us to believe.